At TeeFury February 25th only!

KRE-O now has Dungeon and Dragon building sets and mini figs. The Kreons are sold on blister cards and not in blind bags with a small vignette for the character.  The KRE-O site list army building packs for $2.49. I did not see these in store. What I did see were the Kreon sets and some of the larger sets.

I picked up a Drizzt set because it’s Drizzt! He comes with his scimitars, a bow, and a tree. The figure has detail on his torso and legs. The elf ears are molded with the hair pieces. The cloak has three tabs with neck holes. I like the way it makes the cloak drape over his shoulders. There are two display base included as well a typical KRE-O block and a flat round base.  I prefer the round one but guess they included the block for constancy with other Kreons.  There’s also a card with character stats. This sets was $3.99 for 22 pieces. 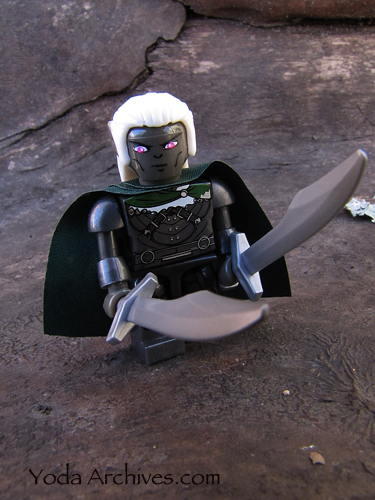 I will look for the army builder bags and may get some if I see any interesting minis.  The KRE-O page won’t let me zoom in to see what all figures are available. It looks like they have the basic character classes and some monsters. KRE-O blind bags are usually coded with numbers so you can tell what character you are getting. Until the list is published online, avoid duplicates by looking for numbers on the bags and making sure you don’t get duplicate ones.

Look for them at places that carry KRE-O  sets. I tried the where to buy feature but think it just list where Hasbro stuff  is sold. Every store listed said call store foe availability.
See sets and figures at Dungeon & Dragons KRE-O.

So do you plan on adding any of these to your collection?