I had a day off on Friday. I spent part of the day shooting mini figs. I had just download the  new images to the computer. Thunderstorms have been in the forecast all day and they finally started. I could hear the thunder outside my office, I glanced out the window and saw the rain falling but not heavily. I spotted the mail truck outside and figure I better get the mail before the rain got bad.

I shut down the computer and downstairs. As I opened the door, the lights go out. We just lost power. And where it was light rain a few moments before it was now pouring outside. I stepped on the porch and the wind is blew rain in my face. There’s thunder and lighting  but the porch is covered so I thought I’ll wait out the storm. The lights flicker back. Then there’s a Kaaarck as a tree limb crashes to the ground.

I watched the rain awhile longer then decided it’s not slowing down so I’ll head back inside. I turn around and there at my feet is the my first Nerd Block.

Nerd Block is a monthly subscription service for geeks. Every month, subscribers will receive a package containing a t-shirt and 4-6 toys or collectables. You pick the shirt size but the design and toys are unknown. I signed up for the June box because they announced there were two shirts and a Doctor Who item in the June block.

I’ll  start with the smallest item, a Minecraft sticker by Jinx. Retail $1.99. Cool if you play the game. I don’t but will pass it on to somebody that does play.

Next is a Wii Mario Kart racer. I got Donkey Kong. Which is good cause he’s my favorite. Retail ~$2.00 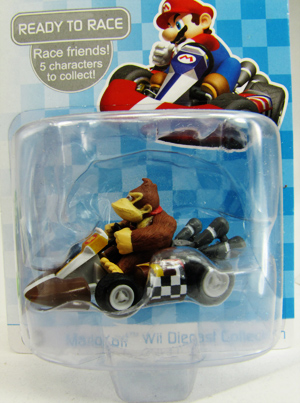 Next are the shirts. Iron Sentinel and Who you gonna call. Both are cool shirts. I love Ghost Busters and Giant Robots. Retail $10 each. 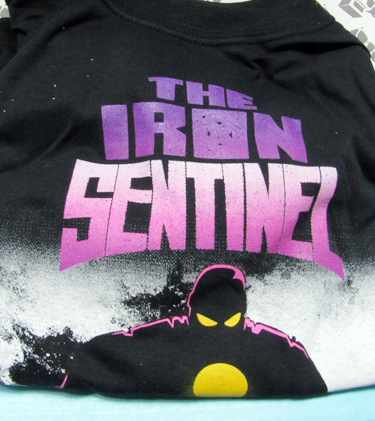 Next is the Doctor Who item. It is a Titans vinyl figure. This is from the Doctors series and it could have been any of the eleven Doctors. I got the First Doctor. These are neat figures I have a Judoon from series. Retail $8-$10

But the big surprise in this box was a game.

It’s a Nerd Block pin art game. You make shapes and design by pushing the pins. This will live on my desk and most likely appear in action figure photo some day.

Here is  the Doctor in the blue box of pins.

Spoiler alert! If you get a box don’t read the shipping label. There is a mini invoice on it that tells whats inside. It’s vague but may reveal more than you want to know. I saw “vinyl figure on mine.” which was the Doctor Who figure. After the unboxing I read the entire label. It specfically said Mario cart racer but were listed in generic terms; shirt, sticker, game.

Subscriptions for July are open. Nerd Block has announced that the block will include two Star Wars items.

This entry was posted on June 24, 2014 by Chris. It was filed under Action Figures, Yoda and was tagged with doctor who, mystery boxes, nerb block, spoilers, surprise box, tee shirts, Tuesday's Toy Review.