It’s the middle of the year. July  2 is the mid-point of the year,  so time to reflect on the blog. I have made my goal of beating last year’s views for each month of the year.  so that’s good. July was my second busiest moth last year thanks to Despicable Me 2 blind bags and toys. I have a hard goal to meet but think it is possible.

I have more photos planned I just have to make the time to get them done.  I wanted to do a Darth Maul cut in half for the first half of the year image but I took extra hours on the day job. So here’s half Darth Maul and half Dalek for a while back. 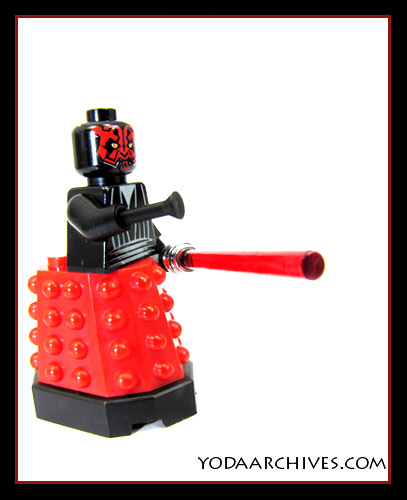 I look forward to the rest of the year. You can expect more toy photography and toy reviews. I plan on some kind of daily post in October either Return of Robotober or a Halloween countdown with various monster toys. And this December I’ll blog the LEGO Star Wars Advent calendar featuring Santa Darth Vader.

July 2, 2014 | Categories: LEGO, Other Building Bricks, Yoda | Comments Off on Half Year review.

Nerd Block just announced that their July Block will feature a San Diego Comic-Con item in addition to the two Star Wars items they’ve already announced for the month.

July’s Block will feature one awesome SDCC related item!
Did we mention that Stan Lee and Joss Whedon play a role in this fantastic Comic-Con item? We don’t want to give too much away, but your desk collectables will be in envy of either of these superstars.

Stan Lee and Joss Whedon item? My first guess would be an Avengers item. But who knows. Guess I’ll learn in mid July.

Subscriptions for July end in less than two weeks. Blocks ship on July 15.