Sometimes when running a blog you learn about stuff via your readers. That what has happened in this case. Last month “Mega block minions  blind bags” appeared as a search term in my stats. That’s pretty specific and different from the Thinkway toys blind bags. I ran a search and found out that Mega bloks does have megabloks minion minifigures. I saw one big set a few days later, but no more till this week. I have found the playsets at Target and Toys R Us.  Today I finally found the minifigs.

They are called buildable Minion blind packs.They are in blind boxes not bags. There are six figures in series one. The instruction sheet says there are common, rare and ultra rare figures. It’s doesn’t give you odds on find any figure. But there is a number stamped into the bottom of the box. Mine had A22094ES on the box and the figures was a Minion with a banana. That checks out with a list of code posted at Dollastic . The figures have a suggested retail of $2.99 but are $3.99 at Toy R Us. The MSRP on the sets range from $5.99 -$19.99. There are seven sets to collect. You can see them all here,

I got a figure and a set. I’ll do a full review in a few days. Short review for now The figure I got looks great. It’s molded in color with just a little bit of paint for the hair. The goggles, overalls and banana are soft plastic. The goggles really give it personality when they are snapped on to the figure. The legs and arms are hard to snap into place. You have to have them lined up just right. The say you can mix and match arms and feet but I don’t see that happening much if it’s this hard to snap them into place. 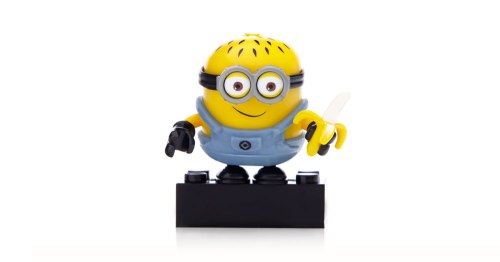 Mega Blok’s Description of the toys.

Everyone’s favorite Minions are about to unleash some major chaos with the Mega Bloks Despicable Me™ Buildable Minion Blind Packs Series I packs. Build your own loyal following and collect six popular Minion characters. They come in a blind pack, so you never know which one you will get. You can customize your Minions and mix and match overalls, goggles, accessories, even arms and feet. Collect them all to build your own mischief!