Brickfaire Alabama is January 17&18 11am-4pm at the Birmingham Convention Center (East Hall) Come and see LEGO builds. They will have games and contests. Plus a vendor area with LEGO resellers and customize brick sellers. Brick Fair will host a Play area where attendees can just free build.

BrickFair brings together adult fans of LEGO from across the USA (and Canada, and a few other countries) to show off their projects, great and small, and to share their passion for LEGO – the most awesome toy – ever. -BrickFair

Tickets $10 three and under free. Parking $8 but metered street parking is free on weekends. 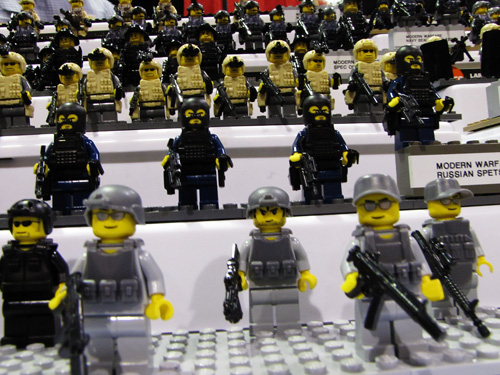 I attended last year and had a great time. There was so many things to see and do you didn’t know where to start. There were dozens of s LEGO sold in sets or by the brick. Many vendors were selling loose minifigs either form the collectible series or from opened sets. There was also LEGO related media the Brickshow and Brick Journal were both in attendance.

Again this year there will be custom vendors that mold new part or take  official LEGO parts and repaint them. Some of these are Clone Army Customs, BrickWarriors, Modern Brick Warfare, and EclipseGrafx. Some of the LEGO resellers include Classic Plastic bricks, Atlanta Brick Company, and we like it bricks and studs.

This one of the parts vending machines. There was a group of them called Build a Girl. Each machine had a body part one, a head, one a torso, and one legs. Onece you visited them all you had a randomly made minifig. There were also machine that had just bricks by kind or building function.  These are some nice options to get a bit of the randomness fun.

Brickfair Alabama runs January 17-18  at the Birmingham Convention Center in Birmingham, Alabama. 11am-4pm. $10 admission. If you are a LEGO fan and nearby be sure to visit.  There will be three more Brickfair events later this year.