I recently started a BrickSwag subscription. It’s like the other surprise boxed but it has LEGO. Each box has a Brick themed Tee- shirt, some kind of mini-build, a printed brick and more. I got the November box a few days ago. I had a little time so I went ahead and made the build included with this box. Since is a turkey I wanted to go ahead and build it now. 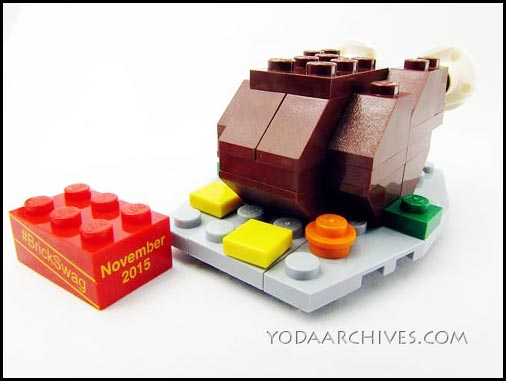 This is a neat build.  A Turkey with vegetables on a platter. There is also the printed 2×3 block with #BrickSwag on one side and the month and year on the next side.  There is more in the box I just didn’t have time to photograph it all. I have a couple of days off in a row next week so hopefully I can get the who;e box photographed then. I actually got the October box as well but between the Ren faire and class, I haven’t had time to even build the October build.

I have begun the final project for class. I know what it will be but I have to plan and build it. Along with wrapping up all the other  project i need for class. The next couple months are going to be pretty busy with school so the blog may be quite for a while. There may be some stuff, like the rest of BrickSwag posted Thanksgiving weekend. And I plan on posting Star Wars Advent Calendar in December. And that may be it for the year.

Graduation is in January then that weekend is BrickFaire.

What do you think of Brick Swag? That’s not all that is in the box there’s a t-shirt, a mini magazine,  and bag of bricks, and a couple more things.  If there’s interest I’ll continue to blog the boxes. Next’s month theme is Force.