Batman Day is here, but does he want to go back to bed?


It’s Batman day, So here is batman dealing with loud neighbors. This is Thor’s New Asgard set. There’s more specialty bricks since the last time I posted this set. 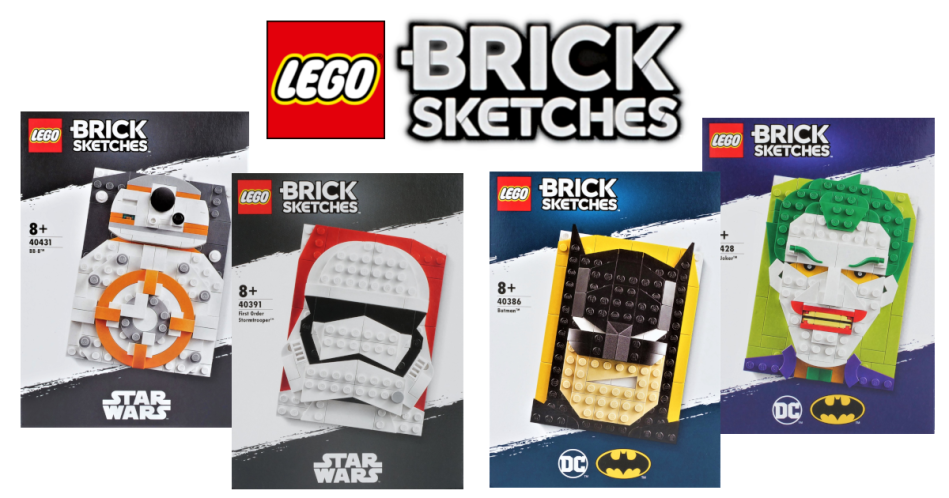 LEGO has annoucned a new series LEGO Sketches, These were designed by LEGO artist Chris McVeigh. He’s been making these on his site for years. But now are an official set that you can get this summer.

These first sets are BB-8, First Order Stormtrooper, Batman and Joker. I’ll get BB-8 and Batman. 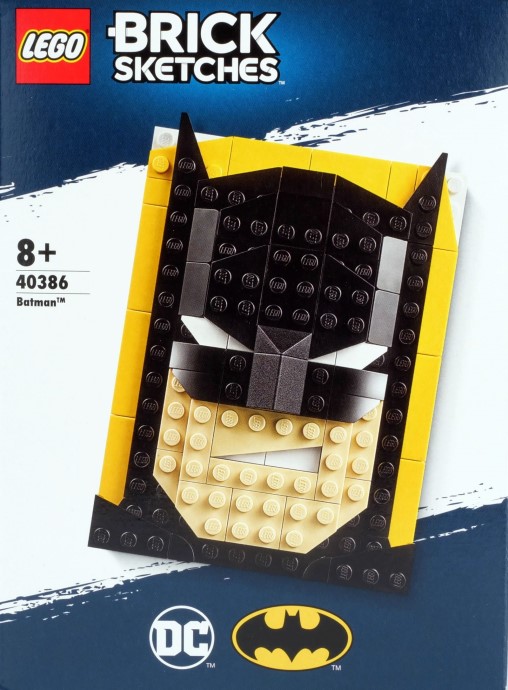 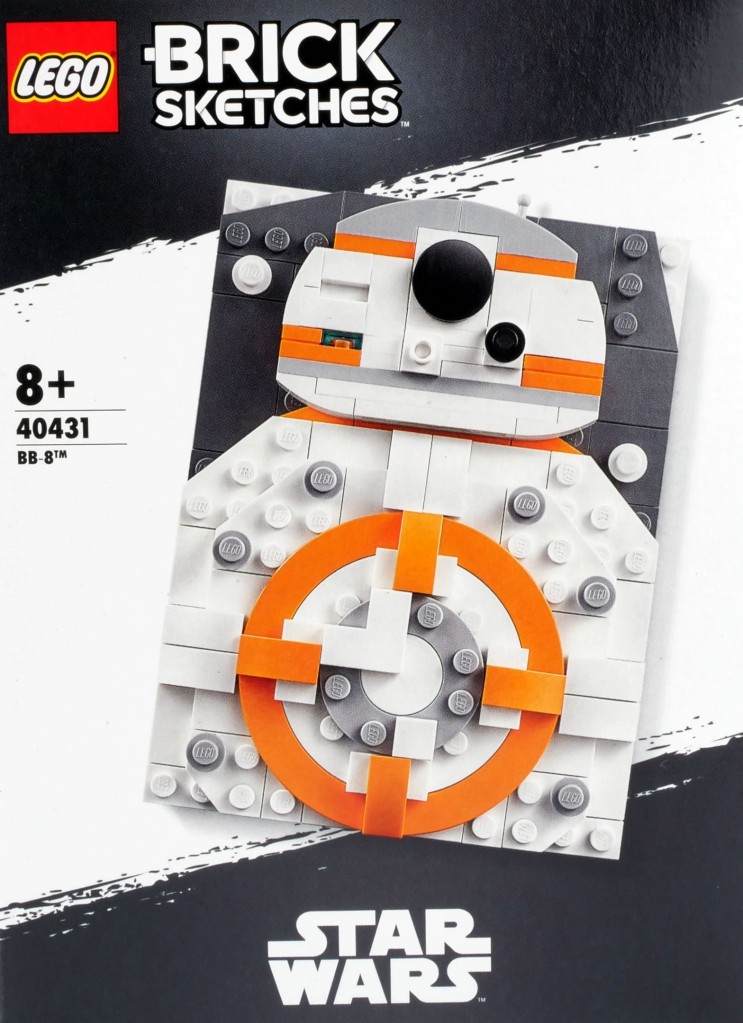 I’ve admired these since I saw the on Chris’ site. They remind me of the old Toys R US build of Captain America set my son made. I toyed around with building my own character portraits like this but never got far. I bought some plates for it and that;s about as far as I got. The Brick Sketches have a better look that this old kit. The blocky look is replaced by a more in depth look. I can’t wait for these. 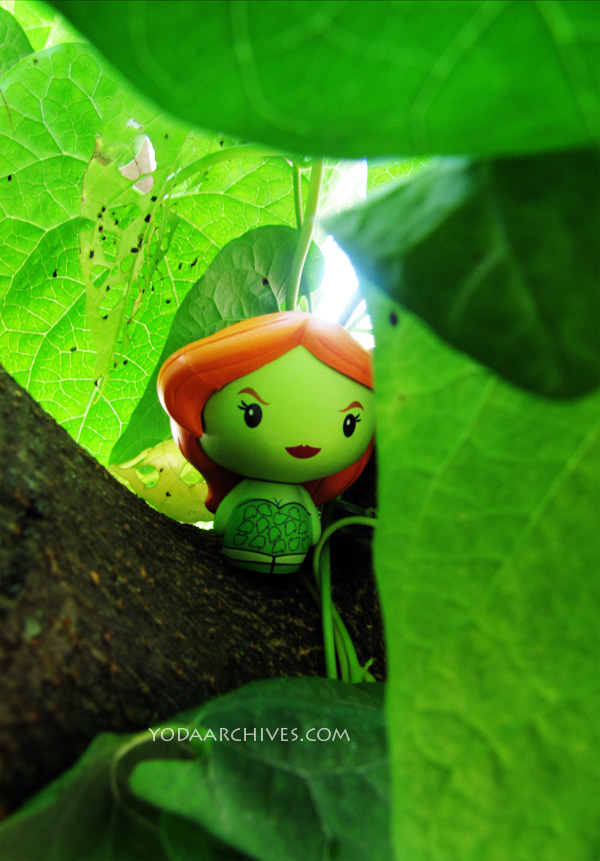 
The new trailer for the LEGO Batman movie. The movie comes out February 2017.

Look what is coming next month. The new DC superheros Character Encyclopedia with a Pirate Batman. I like the phrase Buccaneer Batman better. He’s pretty cool even though there’s already a ton of Batman minifigures already. See DK page for more. Amazon has its US release date as April 5.

Today I got the newest DC LEGO Dvd with a Cosmic Boy minifig. Found it at Target. 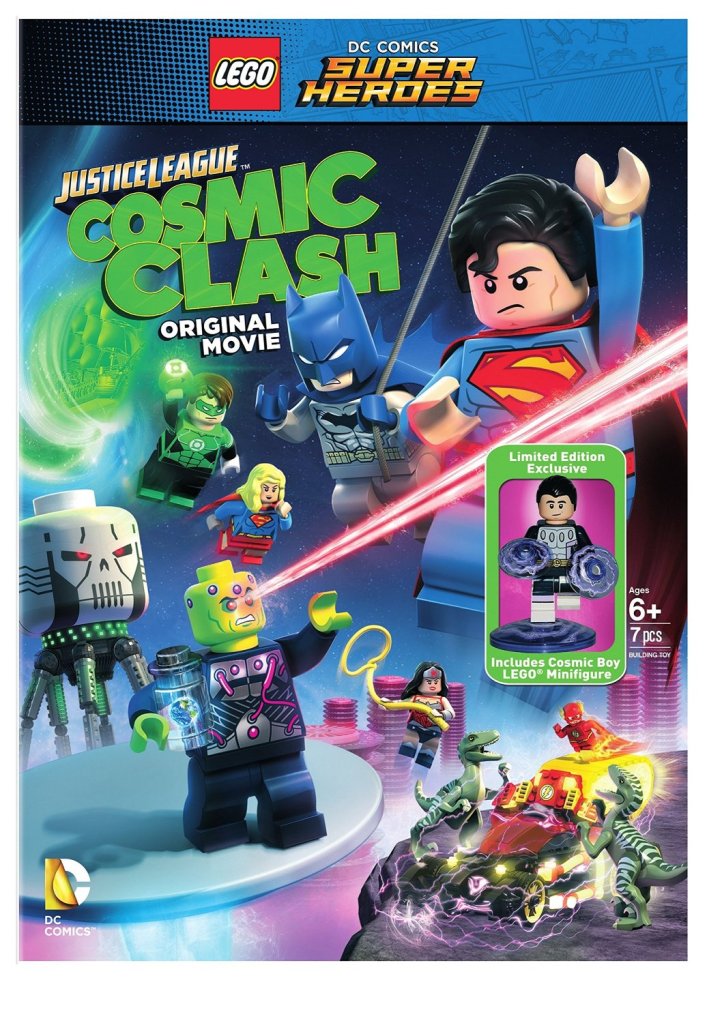 Are you going to pick up either of these?

Get this limited edition shirt now on TeeFury.com!

Affiliate Post Shirtpunch buy a hoodie get a free Tee

At ShirtPunch today only buy one of four hoodies get a free tee with the same design.  Detail buy a Zip or Pullover Hoodies is guaranteed to receive a Unisex tee in a matching size and design!

On another note my Nerd block arrived today.  P 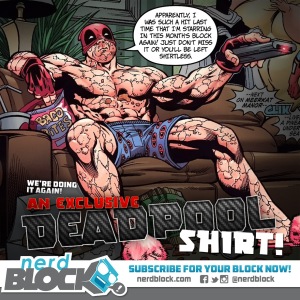 Ript Apparel theme for the day is Batman. The designs mash batman with minions, classic LEGO space, and How to Train Your Dragon. $10 each.

Holy Shark week get the repellent

ShirtPunch has a new website and they now offer four tee shirts a day. To celebrate they are offering a discount on their partner site, Nerd Block. The first 300 new subscribers  with a code, save 15% off their first month’s block. For August they have teased a few of the items. The shirt will be Pokemon related. There will be one of two Batman related items and a Funko Pop vinyl item. So far I most excited about the Funko vinyl, those things are so cool.

Nerd Block is a monthly subscription service for geeks and nerds! Every month, subscribers will receive a package containing a t-shirt and 4-6 toys and collectables!

Thank you to all of our fans for checking out the new ShirtPunch!

We’re celebrating by teaming up with Nerd Block! The first 300 people who use the code “NERDPUNCH” will receive 15% off their NerdBlock subscription.

Nerd Block is just like comic con in a box! They’re the monthly mystery geek package delivered right to your door! For only $19.99 a month plus shipping, you get a box filled with a custom, limited edition ShirtPunch t-shirt along with toys and collectables from your favorite brands including Star Wars, Adventure Time, Doctor Who, Marvel, and many more!

My alternative version of yesterday’s strip.

The maid Minion came from a new Toys R Us set. I’ll have a new post on that set later today.

Alfred Pennyworth is on vacation. But don’t worry Wayne Manor in in caring hands. 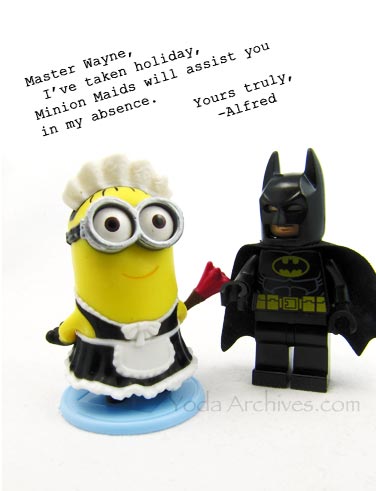 The maid Minion came from a Toys R Us set. Ten more Despicable Me mini figures.

Happy Birthday Batman. The Batman turns 75 today. DC has declared today as Batman day. They having a huge digital comic sale to celebrate. 750 Batman titles will be made available for digital download for $.99 each for one week only. Plus today only 10 essential Batman graphic novels for only $2.99 each. 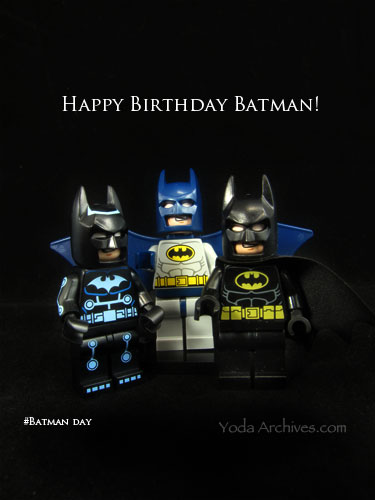 BURBANK, Calif.–(BUSINESS WIRE)–As part of their ongoing celebration of Batman’s 75th anniversary, DC Entertainment (DCE) announced today that 750 Batman titles will be made available for digital download for $.99 each. For one week only beginning on July 22, fans can become immersed in the adventures of the world’s most popular Super Hero. The special sale coincides with “Batman Day” on July 23 and Comic-Con International: San Diego 2014 activities, which will also shine a spotlight on the iconic comic idol.

The largest English-language publisher and the leader in digital comics innovation, this marks a first-of-its-kind offer for DCE across all digital platforms including comiXology, Google Play, iBooks, Kindle Store and Nook Store. Key Batman titles and storylines featured in the sale include Batman: The Dark Knight Returns, Batman: The Long Halloween, Batman: No Man’s Land, Batman: Year One, Batman: Hush, Batman: The Court of the Owls, All Star Batman & Robbin the Boy Wonder and many, many more!

DCE will also launch a 24-hour eBook sale that day only across all digital partners – offering 10 essential Batman graphic novels for only $2.99 each.

“Digital comics make it possible to get Batman anytime, anywhere and this sale is the perfect opportunity for fans to dive into the world of the Caped Crusader,” said DC Entertainment Co-Publisher Jim Lee. “Now, thanks to this mammoth 75th anniversary sale DCE is making it easier than ever to collect an incredibly broad range of Batman’s best stories, at a price that doesn’t require a Bruce Wayne-sized budget.” 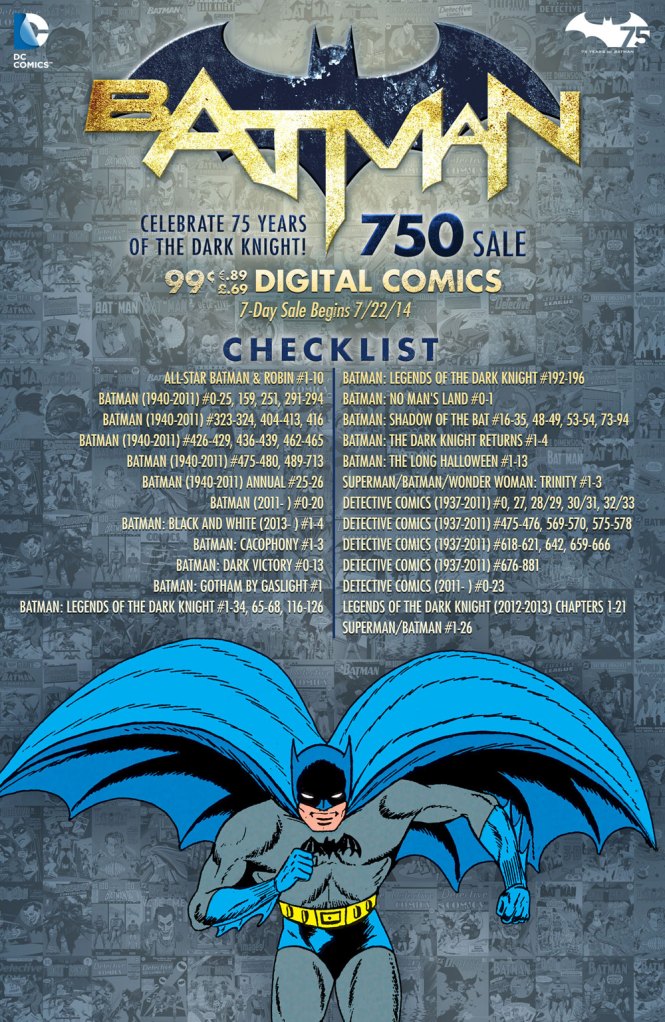 To further mark its July 23rd Batman Day activities taking place at hundreds of comic book retailers nationwide, DCE will also launch a 24-hour eBook sale that day only across all digital partners – offering 10 essential Batman graphic novels for only $2.99 each.

At TeeFury  Monday May 19th only! The Doctor and Batman mash up. Doctor Comic by harebrained. $11 choose between Navy, Black, or Dark Chocolate. Plus free Time Lord sticker with purchase. 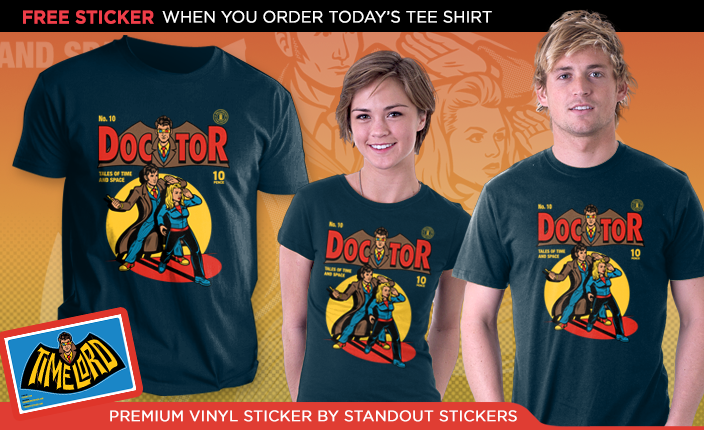 AND IN BLOG NEWS


The LEGO Action cups are now in happy meals. It’s just a cup but if you scan the code there’s mini games in the Mcplay app.

Justice League Tots and Toys at Sonic during June. But the main reason for this post is a reminder that today, June 20 is 1/2 price shakes all day.

I finally got a Batman Tot. It took a few visits I got left over flying discs and a Green Lantern Ring & magnet combo before I got my first Justice League series 2 tots. I now have Batman and Wonder Woman tots.

This series has six tots plus four other toys. But that’s not the full collection. The Green Lantern ring comes with one Super Tot Magnet. There are seven magnets, I think one for each Series 2 tot. But there are six tots. What’s the seventh magnet? I don’t know it might be Flash because there’s a Flash tot on the Ring/magnet bag but Flash tot was in last year’s series. So was Wonder Woman but she’s also in series 2. I don’t know if  the 2013 Wonder Woman tot is the same as the 2012 tot. I don’t have a 2012 version to compare the two. Why have her twice? Why not another tot?

Wonder Woman Tot is a re-issue of the 2012 “Justice League: Series 1 Tots” Wonder Woman Tot but with a new hair fabric, stitched-in-place tiara and body graphic updates to include recolored star earrings and the addition of a golden lasso. – See more at: http://experiencethewonder.com

The Sonic nearest me has Wacky Wednesday. Each Wednesday Wacky Pack meals are only $1.99. I don’t think all Sonics offer this deal. This one has a sign next to the Menu that advertises the deal. I’ve not seen the sign at other Sonic locations. I ran a search and saw locations in other states that hold Wacky Wednesday for the evening hours.
June 20 is half price shakes all day so that be a good reason to head to Sonic. I’m guessing this is a chain wide deal like their Tax day special but check your local store to be sure.

UPDATE: As I guessed Flash is on the ring magnet bag because he is on a magnet this series. The magnet is shown on this image.

Thank you to Experience the wonder.com