Mouse in the mail.

May 13, 2015 | Categories: LEGO, Other Building Bricks | Tags: custom bricks, Mouse guard | Comments Off on Mouse in the mail.

Bricks of the Mouse Guard Kickstarter

Crazy Bricks is about to wrap up another Kickstarter project. This time they are doing the Mouse Guard. Mouse Guard is a graphic novel series by David Petersen. I have not read the series but the artwork is beautiful. 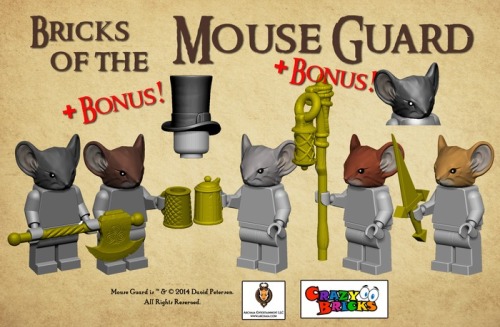 In Mouse Guard, mice struggle to live safely and prosper among all of the world’s harsh conditions and predators. Thus the Mouse Guard was formed. They are not simply soldiers that fight off intruders; rather, they are guides for common mice looking to journey without confrontation from one hidden mouse village to another.

The sets will include various mouse heads and character accessories. The head colors are tan, grey, reddish-brown, and dark brown. The accessories are two styles of flagons, a cool axe, a lantern on a staff, and a sword. I really like the looks of these flagons. I want to get a bunch of these for my minifigs when they are released next year.

Each accessories set comes in your choice of one of three colors – Gun-Metal Grey, Brown,  or Gold

They already have added some pre stretch goal items. Each set will include a bonus black mouse head and a stove pipe hat. They hit the first stretch goal bonus, an extra flagon. The next goal in another bonus flagon. AT $25,000 they add a random item, And if they hit $30,000 they plan for add ons.

2. 1 x 8 Mouse Guard Badge Bricks so you can show your love of the Guard!

3. You can ADD ON additional Crates of the Matriarch!

They have a target date of March 2015 to have the Mouse Guard bricks ready for the tenth anniversary of the Mouse Guard Series. Alice Finch and Washington state based Lego User Group, ARCHLUG plan to build a World of Mouse Guard MOC at Seattle’s Emerald City Comic Con. Alice Finch built Hogwarts Castle out of 400,000 LEGO bricks. She displayed at BrickCon 2012.

The Kickstarter ends late Sunday night. It has already been funded so they stretching for the extra goals. They are less tan 2,000 away from a second bonus tankard in every set.

I supported Crazy Brick’s previous kickstarter event for the Munchkin Bricks. I hope to have those bricks soon. I’ve been looking forward to them for a while.