The Doctor reminds you to spring forward. 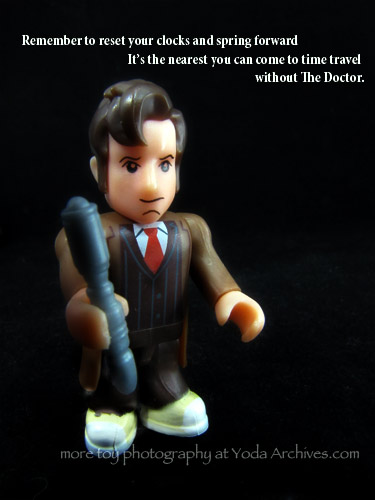 Remember it’s daylight saving time. So spring forward and lose sleep. This is a reblog from last year.

The Doctor reminds you to spring forward.

Be careful when you open these blind bags. The parts fall out some where in my truck there is a mini Gunstick.

I finally was able to photograph the 8th Doctor. This is from 50th anniversary blind bag Doctor Who series.  One random Doctor in each bag. I think they are evenly distributed in each case. The bricks on the checklist are all the same color unlike previous series which had different colors to denote rarity.

Teefury: Limited Edition $11 tees! has another
Tee-fury shirts are available for 24hrs at $11 each. Then they extend the shirt for after hours. You can still get it but the price is $14. After hours shirts are only available for nine hours then it’s gone. Plus they now have Youth sizes! Click their size chart for sizing details.

Available Thursday Sept 5th, Despicable Sea and The Minions have the Phone Box.

If you like this shirt remember to use the links in this post. Tee-fury is an affiliate site. Sales made through these links help support this site. Teefury: Limited Edition $11 tees! 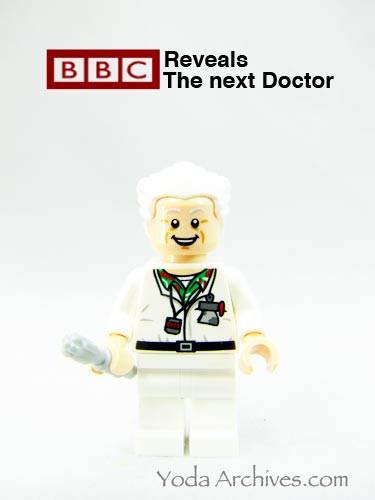 August 4, 2013 | Categories: Action Figures, LEGO, Photography | Tags: Back to the Future, bbc, indiana Jones, lego minifigs, The Doctor, thenextdoctor | Comments Off on The Next Doctor…. 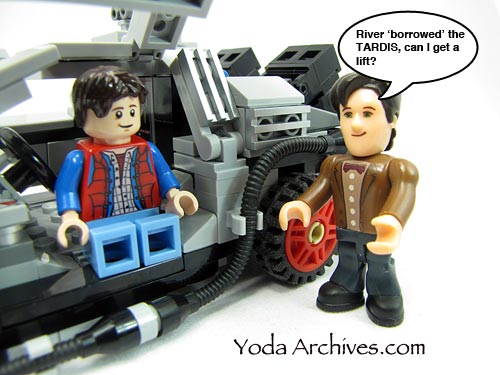 New Page: What’s in the Bag?

I have a new page that lists some of the apps, tricks, and websites that help you determine what is hiding in that blind bag. The link is at the top of this blog. I made a page rather than a post so it could be easier to find. If you have more tips or sites please post them on the page.

What’s in the Bag.

The blind bags are cool but they can be frustrating finding the figure you want. You may want just one figure from a set. You might want to collect all the figures. or you may want multiples of the same figure for army building. But how can you know what is in the bag? These Blind bags guides can help.

The best I’ve found for LEGO is the Touch Guide in the My Mini’s app. The app coats $1.99 so less than a mini-fig and its well worth it. no only does it tell you what to feel for it shows you what mini’s you might confuse with it.

Daleks, Bigger on the blueprints

I’m still working on a caption for this. any suggestions?

1) Next time we hire someone that knows the metric system.
2) They’re bigger on the blueprints.
3) Not to scale
4) Did not Extrapolate!

Also this weekend we’ll be at ConNooga. If you are near Chattanooga drop by and visit. This year they have an exhibit hall only ticket. Which lets people who just want to shop visit the dealer’s room and not the rest of the convention.

ConNooga is just a month away!

Just a month away till one of our favorite conventions. ConNooga is March 1-3 2013 in Chattanooga, TN. at the Chattanooga Choo-Choo plus the Chattanooga Convention Center. We will be there with Fantasy prints, action figure prints, and Hand made Faerie wings. 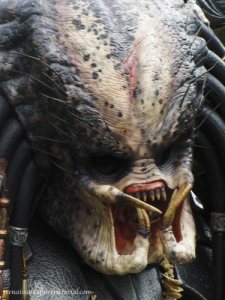 Our previous visits to ConNooga

For the first time – people can just attend the Exhibitor Hall for a lower entry fee to meet celebrities, bands, authors, other guests and make purchases from our amazing vendors.

We will be offering an exhibitor hall entry or people curious or only wanting to attend and see our dealers, celebrities, bands, authors, etc. This fee will only allow a (1) time entry into the Exhibitor Hall at time of payment and does not include any activities at the Choo Choo Facility or any seminars taking place within the Convention Center Meeting Space. Entry into the Exhibitor Hall is void once you leave the Hall. All re-entries must be paid again or have a Con Nooga Membership Badge.

Who can see the future. 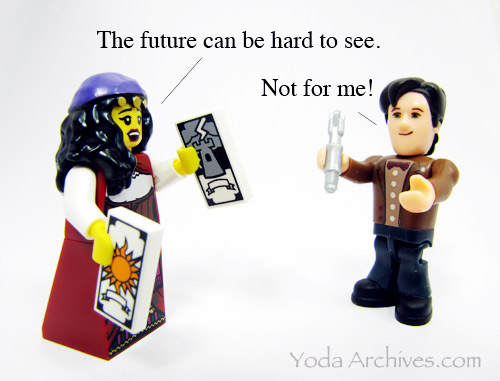 The fortune-teller from series 9 meets The Doctor.

Nowhere bad has another LEGO themed shirt. This time it DR Who themed as well.

“I play with LEGO now, LEGO are cool!” – The Doctor

Only about 12 hrs left. Wish I’d seen it sooner. I made a Vash Nerada minifig using the hazmat guy. I’ll add a link to tomorrow’s post.

New comic tomorrow morning 9am CDT. It features The Doctor. 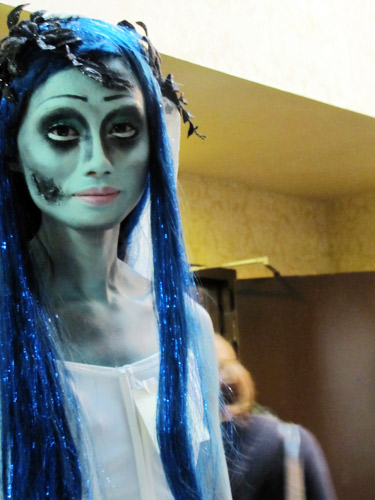 We had a great time last year and are looking forward to MACK II.

December 21 is the birthday of the Daleks. The Daleks first appeared on DR who on 21 December 1963.

The Zombie Hunter finds new targets, the Silence from Dr Who.

Zombie Hunter is a custom mini-fig purchased at MCFC from EclipseGRAFX. The Silence are from Character building. Zombie Hunter last seen here.

It’s been over a week since the Memphis Comic and Fantasy Convention. I finally have time to blog on the con. This was the third year of the con but the first time they had a track dedicated to LEGO. This was also the first LEGO event I’ve attended.

We went to sell my toy photography prints. Once we were set up I got to walk around a bit. The first purchase I made was from the Citizen Brick booth. I knew they mini-fig babies so I had to get one to commemorate my son’s birth. I also picked up a zombie heady and a victim torso.

As previously posted in Zombie Invasion and Magneto’s first job, I got a few custom pieces from EclipseGRAFX. The Zombie fighter is one of the coolest things at the show. 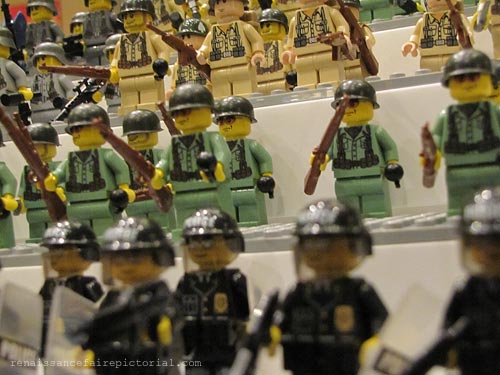 I bought a few Mini-figs from Milton Train Works. I got a series 2 life guard, series 8 Santa and another figure from a set that I don’t own. It’ll appear in a future post. With the purchase of the life guard I now have at least one mini-fig from every series but #1 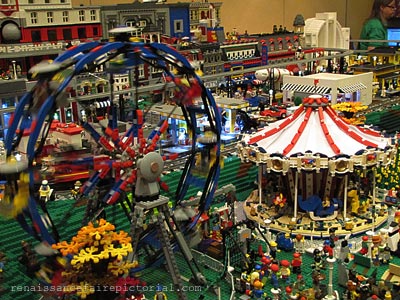 one of milton train works displays.

Brickmania toys had some great looking kits. and a Bikini Bottom MOC. The LEGO group was there but as display only they didn’t have products for sale. But they did have a LEGO Batman comic book. It was game trailer in a printed form.

There were also vendors selling various LEGO sets and mini-figures. Since it was part of a comic convention, there were several places selling comic books, toys, t-shirts and geek stuff. There were also some panels, concerts, and short films. 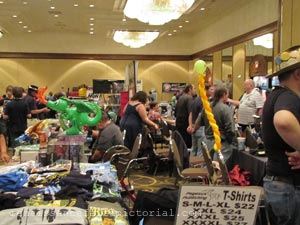 We had a lot of fun and hope to make it back. More pictures on my site, RenaissanceFairePictorial.com

Coolest costume at the convention. 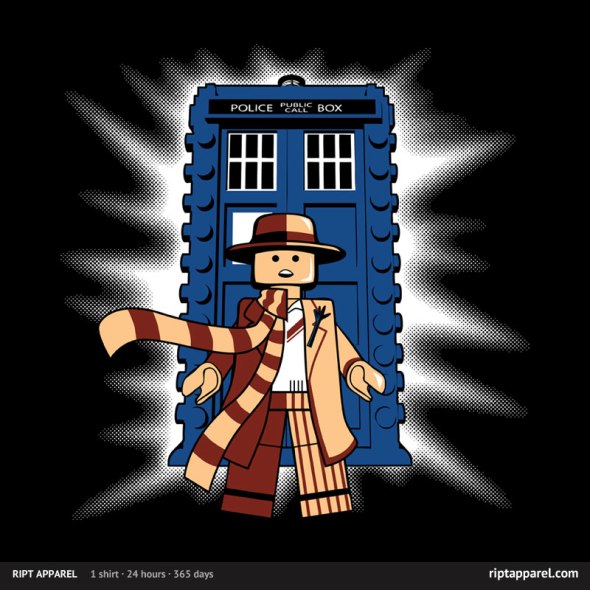 Spring is in the air and the Monster has found Love.