Throg wishes you a Hoppy New Year, Throg is part of the MarvelStudios minifigure blind bag series. He is packed with Loki. The fountain (40221) is a LEGO creator set. I got it with the LEGO VIP program. the set has park benches and a dog. If you’ve seen my Hawkeye posts that dog is Lucky, the Pizza Dog. I wish the helmet and beard were gold like the wings. I think there’s too much gray in the set.
Otherwise a cool set. You’ll see it more on here.

Are you unboxing an advent calendar? Which one? If you are blogging it put a link in the comments.

Batman Day is here, but does he want to go back to bed?


It’s Batman day, So here is batman dealing with loud neighbors. This is Thor’s New Asgard set. There’s more specialty bricks since the last time I posted this set.


Here is the Bro Thor’s New Asgard set (#76200) 265 pieces $29.99. Lots of small pieces for Thor’s home decor. I added some custom bricks to update the room. The set has many of the bricks that look like layered bricks( 1 x 2 with Masonry Profile). The masonry bricks are some of my favorite pieces. I’m glad there’s’ two colors in this set. Plus some of the Modified 1 x 2 x 1 2/3 with Studs on Side pieces used in Brick Headz. I like this set and will continue to modify it and use it as a setting in photos. Includes Thor, Korg and brick built Miek

I added a few things from my collection Can you spot them? List below this picture.

END_OF_DOCUMENT_TOKEN_TO_BE_REPLACED

Last Saturday we made another trip to Lowe’s for Build and Grow. This week’s build was Thor. We were attending an art  show in another city, so had to attend a different location. They were set up different from my local Lowe’s, they didn’t have work stations set up so we just built on the floor.

This was a fairly easy build. The instructions were clear for adults but smaller kids would need help. There are some steps where you have to place stickers before nailing. The instructions point these out just be sure to read them a couple of times.

Like all the other heroes, Thor has an action feature, he has an audio component. Press the button in his chest to hear thunder. It is not too loud. So should bother someone if a child is playing with it in the same room.

After completing the build. We showed it to the Clinic Captain and got a certificate. The Clinic Captains fill them out while the kids were building the project. That was a nice bit of organization on their part. It has the child’s name , the project name, and the date. The graphics are similar to the ones on the patches and instruction booklets.

The figure comes with a wedge-shaped base with the character’s name on it. Once you get all six the wedges make a circle with the Avengers logo. The Avengers stand back to back in a cool display. 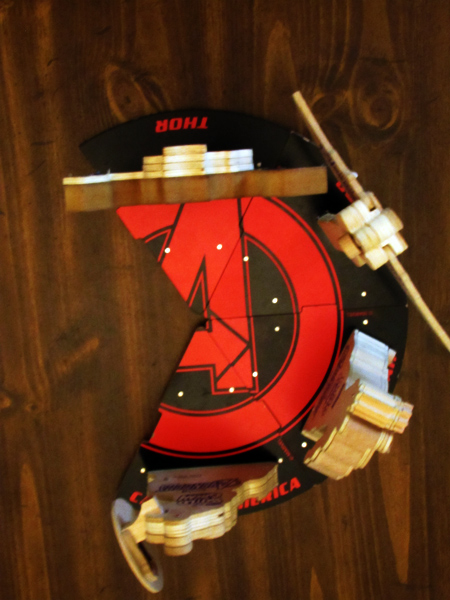 There are two more Build and Grow Avengers events. The next one is Black Widow and Hulk finishes out the collection. The date for the Black Widow set is Aug 13 and the Hulk date has not been posted yet.

The free kit has a wooden project, instructions with a comic on the back,  a patch of that project, an apron and goggles. The event I went to we saw kids with aprons and goggles. We didn’t get either when we checked in. When we returned the hammer, we saw the aprons and asked for one, but I didn’t see goggles. You can put your child’s name on the apron and iron on the patches. Then they can wear it the next time.

To attend the event you need to register at Lowe’s Build and Grow. Use the store locator to fins the nearest event. Fill out the form. Then print out the waiver and bring it to with you. Registration for the next event opens Monday after an event.

NEXT PROJECT: The next Build and Grow project is Black Widow and the event date is August 13.

They also sell some Build and Grow kits. They had a couple of wood car sets and some child sized hammers. The kits are not in the area where the event occurred. At our location they were near the Key cutting section. You can see some of the sets on the Build and Grow site.

The Avengers Age Of Ultron DVDs hit stores today unless…..

Look I’m gonna reuse a joke. I used this for the first Avengers DVD. Since I don’t have time to shoot here it is again.

The Avengers dvd/Blu-ray hit shelves today. Unless Deadpool steals them all.

Appearing in this scene LEGO Deadpool (6866), Thor, and the street from Catwoman Catcycle City Chase 6858

Thorsday is upon us again.

It’s been announced that Mjolnir will be welded by a female this fall. As the current character has become unworthy of Mjolnir. But he will still be around. Here is my version of the unworthy Thor that we will see this fall. I made the figure with parts from my collection. I should have use black pants but they blend into too much with the black backdrop.

What do I think about a female Thor. I don’t see a problem with it. Thor’s been a frog. Mjolnir has been used by Beta Ray bill, Storm, and Thunderstrike. Hopefully we will see some great stories. Others that have wielded Mjolnir. 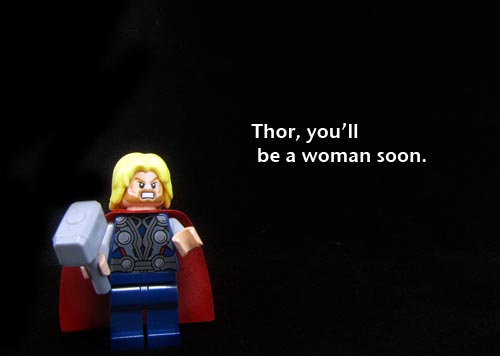 At TeeFury Wednesday July 23 only! A beautiful Loki shirt.  $11 each sold on black, navy or charcoal.  Psst tomorrow an avengers shirt.

Plus Mutants, slayers, and Aliens at Shirt Punch tv for only 6.99 each. ShirtPunch. Today only.  Use the drop down menu at the top of the page to see ShritPunch TV. Their other shirts today feature Aliens and Buffy the Vampire Slayer.

These are affiliate sites and purchasing the shirts via the links on this site helps supports my artwork.

Tempest is a custom fig from EclipseGrafx. She has a dual printed head a pad printed torso, custom cape from CapeMaddness, and custom hair from Arealight. Love the hair . This is one awesome figure.

Avengers vs X-men in LEGO

Tempest is a custom fig from EclipseGrafx. She has a dual printed head a pad printed torso, custom cape from CapeMaddness, and custom hair from Arealight. Love the hair. I’ll have another image of her soon. This is one awesome figure.

I tried to shoot this a few days ago when I shot the updated green guy, blue box photo. But I was missing an accessory, Mjölnir. I can’t shoot a Thor battle scene without Thor’s Hammer.  It wasn’t with Thor,  in the superhero minifig box, or around the studio light box. After looking I while I decided to do test shots and get the figures positioned.
I did the test images and left to process the green guy, blue box. I processed the Yoda image plus another Storm minifig image. I posted Yoda, and it was time to leave the office. That Night I decide I’m going to search my file and see the Last time I used Mjölnir. As soon as I sat down, I remembered. I checked my figs and it was right there. Still posed in a figure’s hand. I don’t know how many time I looked over it. The lesson kids is put your toys up.

Who would win?
State your case in the comments.

EDIT better pic via tumblr. Someone at Charmin has a sense of humor. We live in interesting times…

Thor Lighting Power shirt by Ian Leino is at Tee-Fury. Available Friday November 1 on black or navy.
TeeFury Shirts are available for 24 hrs at $11 each. They now have youth sizes! Click their size chart for sizing details.

If you like this shirt remember to use the links in this post. Tee-fury is an affiliate site. Sales made through these links help support this site. TeeFury

A great day to fly

It rained all day yesterday. Today I got off work early. I had time to run my errands, work on future posts and still had time to enjoy the sunshine.

The Avengers dvd/blu-rays hit shelves today. Unless Deadpool steals them all.

Appearing in this scene LEGO Deadpool (6866), Thor, and the street from Catwoman Catcycle City Chase 6858

Appearing in this scene Thor (LEGO Superheroes Thor and the Cosmic Cube 30163) plus Captain America (6865), The Hulk (5000022), Spongebob Squarepants, and Patrick (Heroic Heroes of the Deep 3815) make their Yoda Archives debut.

“Whoever holds the hammer, if he be worthy, shall possess the power of… Yoda”

“Whoever holds the hammer, if he be worthy, shall possess the power of… Yoda?”